Woodstock, IL — Our family and barn has been attending the Prairie State Classic Horse Show for over 25 years, and this year’s show was certainly one of the best with our friend and mentor Sandy Sessink at the helm as the new Show Manager. Judging this year’s show was John Warner, and our wonderful photos are from the talented lens of Jon McCarthy. 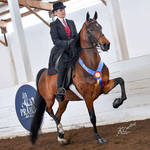 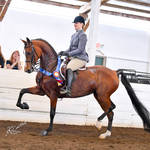 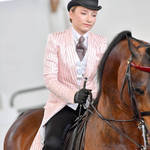 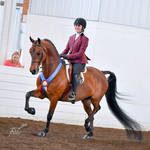 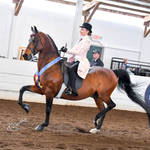 Dr. Katherine Hanson had a great debut on her RWF Designed, as she had the winning ride in the Morgan English Pleasure Junior/Novice Horse Championship after trainer Becky Gruenberg tested the waters by winning the qualifier with this lovely mare.

Cameron Gruenberg and Queens American Idol GCH continued their winning streak in the Jr Exhibitor Classic Pleasure Saddle this year with back to back wins in their qualifier and championship here, as well as winning the AMHA Saddle Seat Medal.

Kris and Al Breyer’s beautiful Newmont’s Mila Belle CH was having a red ribbon show with reserves in the Open and Ladies with Becky in the saddle, and finishing with a well earned third in the very competitive open championship. Also carrying our flag in the western pleasure division was Christie Batka with her lovely CBMF Whispers Of War, who stood third in the Morgan Open Western Pleasure and earned a good ribbon in the Ladies class as well.

Natalie Johnson enjoyed two great rides on the Breyer’s BPM Estralita De Oro GCH, with a second in Jr Exhibitor Western Pleasure and a third against both amateurs and juveniles in the championship.

GSK The Negotiator and Becky were second for owner Susan Klotz in a deep class of Hunter Pleasure Stallions & Geldings, and also tied well in the huge Ladies qualifier.

Jessica Wilber and Becky teamed up to take third in the COTB English Pleasure Pro Am class, and were the top placing Morgan in this fun event.

Emily Enke made it two shows in a row with Town Affair GCH as the OTAB Walk/Trot Pleasure Champions after winning their qualifier.

Al Breyer enjoyed three excellent drives with Merriehill Angel Dust in the Carriage Driving division, with a first in Working and two seconds in Turnout and Reinsmanship.

Our next show will be the Gold Cup Morgan Regional in Columbus, Ohio the middle of June. Stay tuned to read all about it!